The point in time or space at which something begins 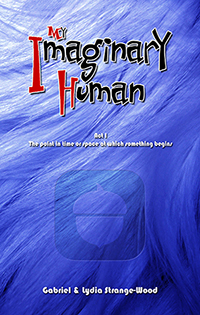 The universe is about to end, and an old man has decided that Emily was going to save them all. But she isn’t, “The One”.

Emily Darling is unhappy with her boring office job, the boyfriend wants her to give up everything and move to New York. Yet, Emily doesn’t know what she wants in life.

Emily wishes she could just go on adventures again, like those she went on as a child. Her Grandfather always told the very best stories about such grand adventures with brave heroes, squirrels, faerie castles, and amazing dragons. All this took place in the far far away magical land of Arcadia. Her best friend would join them on these quests. His name was Heefcliffe, a large blue furry monster who happened to be Emily’s imaginary friend.

Oddly enough Heefcliffe misses these grand adventures as well. He has found solace in the bottom of a rum pot. The faerie was never quite the same after he said goodbye to “Emme.” Thankfully for both of them, the faerie and human realm were about to collide and put an end to everything. This will upset a lot of people and make a few happy. So the two friends embark on Emily’s grandest adventure yet. Many talking cats, dogs, mice and even a few humans, are more than happy to help them along their journey. One thing Emily Darling has to remember, be careful what you wish for.

All of our eBooks are free to read on Kindle Unlimited or with Amazon Prime. If you don’t have a Kindle Device, you can download the free Kindle Reader App for Windows, iOS, Android, and Blackberry. We offer our books for free when we are able to under our Amazon agreement, registered Kindle Reader software or hardware will give you access to these offers. Though we do ask where you can afford to, please support the arts. If you don’t buy our books, buy them from other independent writers.

Imagine you left your native country because you wanted to explore your neighbouring world and embrace the European dream. Imagine you truly believed that the European Union was your home and that, as well as being a citizen of the country you were born in, you were also a citizen of Europe. Imagine you fell deeply in love with your new country. Imagine you built a life there, married, had children, a career, and started a business... You felt happy and totally integrated. You were at home. [link]